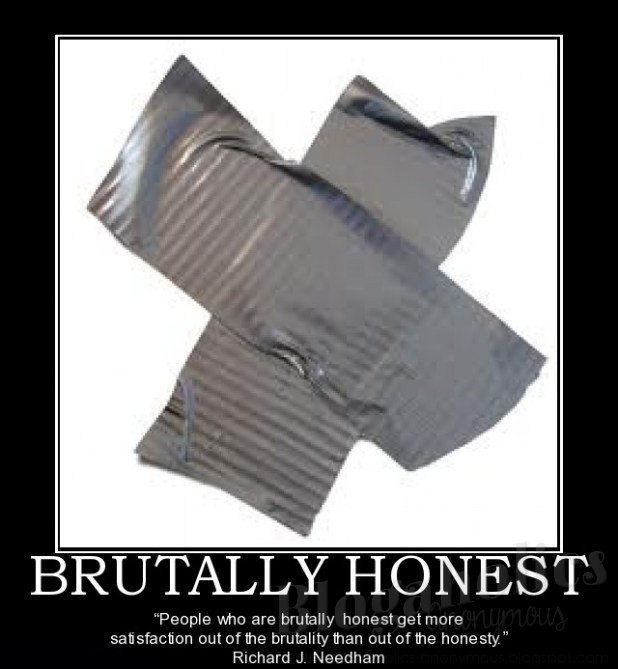 Today's Tip: This one goes out to all of the "honesty" bloggers out there. I'll admit, I got this idea watching an episode of "House" but it is something I have known for quite a while and just didn't put down in type. As a blogger, I do read other blogs quite often and I rate them accordingly. It's kinda the way things go, because we all judge people or else we never grow as human beings. The 100% "honesty" bloggers rarely are 100% honest, and what's worse is they have to give disclaimers on their honesty, which makes it a little hard to take after a while. I don't just say this because I am judging others, I say this because I am judging myself, and then I see it in others.

For example: If you find yourself reminding people about the ins and outs of "Brutal Honesty" you may just be tapping into the art of "Unnecessary Honesty" which will attract readers, for a bit, but in the end it stops being charming. Most people who wax poetic often about being "Brutally Honest" have their translations confused, and it doesn't take long for people to translate it as what it is, "I am going to be an asshole and I want the people with arrogance issues or low self esteem to justify it for me." The fact of the matter is honesty is neither brutal nor admired, it is just honesty, and it doesn't need a justification. Of course this doesn't mean that someone who is generally honest and it offends some people doesn't have the right to do so. I know quite a few of those writers that I never miss a post from, but it isn't because they are "brutally honest" it is because they speak their mind and are fine with the consequences.
Posted by Jeremy Crow at 4:15 AM