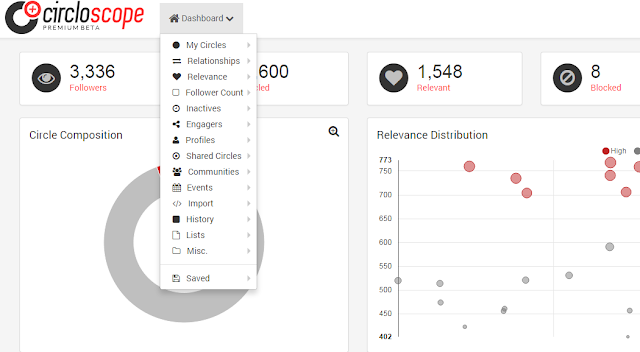 Today's Tip: Well I said I would tell you the greatest social media tip of them all today, and here it is. Well ok I have said this a lot in the past but I am now going to tell you how to actually do it without interfering with your other responsibilities as a blogger. You need to concentrate on people that help you build your brand, and to do that you need to figure out who is actually doing that, while at the same time weeding out the people that are just leeches on your time and efforts. Now I assure you if you are reading this you are not a leech, so don't get offended by what I am about to say, and remember that this will only help you as a blogger.

We are going to concentrate on Google + today. There is a program called Circloscope which is a free Chrome extension. There is a paid version which I would suggest you get when you have a few bucks to spare, but the free version will do you a lot of good to begin with. The two most important features that this little gem of an extension will do, is it will tell you exactly who isn't following you back, and who is actually engaging with what you post. It doesn't get more simple than that. You need to be real here, and it took me years to get honest about a few things.

1. You will never MAKE someone like you.
2. If someone doesn't care about what you have to say, then they are irrelevant.

Now you need to figure out a way to use those two things to your advantage, once you have accepted them. I have 3 circles. I call them One, Two, and Three. Again pretty simple. The circle Two I have shut off from my feed. This is where all the people who never interact with me go. By interact I mean haven't even got the time to + something that I post. This way I am free of their babble on my feed and can concentrate on the people who do interact with me. Every day when I get up I go into Circloscope and I add all the people that interacted to my last 40 posts to either One or Three (whichever is that week's circle of interaction) at the end of the week, I start on the other circle, which means everyone who is in that circle (meaning they never made it to the new week's circle) gets thrown in circle Two and we start all over again.

To sum it all up circle Two is ignored for the charm bracelet folks, while One and Three are in the feed. If I am filling One this week then at the end of the week anyone left in Three goes into Two and the next week I am filling Three. It's heartless, it's calculating, but it is real, and it will keep you building your audience and not begging for clicks. Tomorrow I will tell you how to cull the herd in Twitter, Instagram and Tumblr.
Posted by Jeremy Crow at 4:23 AM