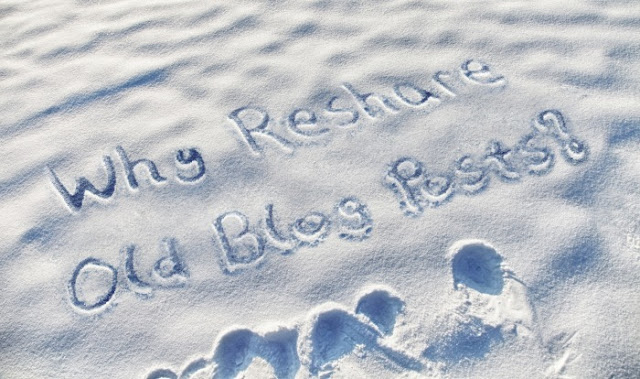 Today's Tip: Let's talk about the old re-post for a few minutes. You'll find lots of opinions on this one, and believe it or not I have had lots of opinions on this. The purist will say that it is tacky to re-share a blog post to the social media feeds, the opportunist will re-share almost every one of their old blog posts to their social media feeds daily, and then you have the people who in my opinion are doing the right thing, re-posting at least one thing a day but never more than two. The reason this is the way to do it in my estimation is because new people show up to your feeds everyday, and some people may not have been looking at feeds the day you posted the greatest piece of work that ever left your fingertips. You'll never know until you try anyway.

Actually to be honest with you no matter how popular one of my blog posts have been they have inevitably been more popular the second time around. Why would this be the case? Well I chalk it up to two reasons and my analytics would lean that way, so I'll pretend I know what I am doing. My audience is bigger everyday, thus when I re-share a blog post a few months down the line, not only are there new people looking at it, but a lot MORE people looking at it. I also thing that there is a popularity angle to it as well. There are people that only want to hang out where the cool kids are, so now that the post goes to the feeds and it has a bunch of comments and a bunch of +s, likes or whatever makes it look popular others may be more inclined to respond to it the second time around.

In any case, it is not a bad thing to re-share, and in most cases it is a necessity to re-share. Now you know.
Posted by Jeremy Crow at 4:43 AM