THE MOTHER OF ALL DREAMS 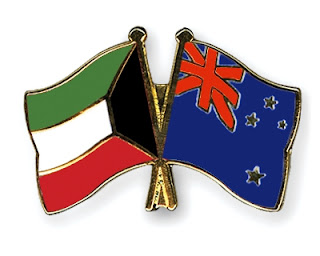 Kuwait is a small country in the North of the Arabian gulf (Persian gulf in western text), in fact it is smaller than the state of New Hampshire, and surrounded by the trouble makers of the world, I mean all what we are missing is North Korea to complete the good, the bad, the ugly, the worst, and the evil , of course Kuwait being Clint Eastwood. And here is the maps which best explains it. 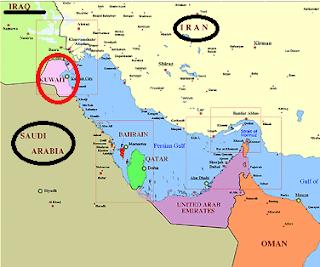 I started with this introduction to tell you the strangest dream I ever had, it all started when Kuwaitis were so fed up with their neighbors that they decided to move this piece of land away from this region, and most of the suggestions were to pull it to Scandinavia somewhere here( as shown in the map) 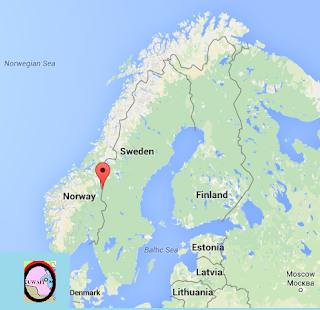 A walking distance from Denmark and Norway with nice, peaceful and good looking neighbors. Now the last justification caused women to hold demonstrations and slowly convinced the men one way or another to put off this idea. The second option was Oceania down all the way close to New Zealand, as shown in the map 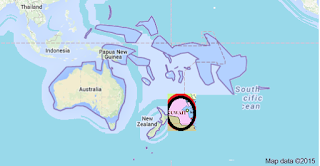 The motion had the majority vote. Few days later I could see the machinery arriving to carry out the job, consisting of huge drilling machines thousand of them and started working immediately 24 hours a day. Meanwhile the politicians were telling the people the time left to move and the progress of the job ,while foreigners were heading back to their countries and a few Kuwaitis whom we thought were patriots and will stick with their piece of land also fled the country. Day by day the population was getting less and less with no traffic jams and no long queues in the ministries, really speaking things were getting better and life was less stressful.
The promised day has arrived, and you can see the huge tugs from the distance with their engines working at max. power, as we started feeling the tremble in the ground, and a minute later we were off, we were moving in the gulf and everybody was on the coast watching where we were. After only a few miles from our journey we heard those loud explosions from where Kuwait was located originally and everybody wondered what they are, until a government official came to explained what is happening, he said: the bad, ugly and the worst started a war between them over the Kuwaiti oil, everybody was in shock with their eyes almost out of surprise, saying: you mean we left the oil behind, how are going to survive there? The official replied, well we could only remove the crust, maybe there are few pockets here or there but we have to explore again, it only took few minutes before people started throwing themselves in the sea to swim back a shore. My wife looked at me as if saying what are we going to do now? I said we stick with our land no matter what, let us wait and see, the official said do not worry we have plenty of food and water.
Weeks later we reached to our new home, the weather was perfect with no heat of 130 deg. F any more in fact it was raining something we have not seen for a while, the tugs left and we were on our own. Without delay we all started drilling for oil but all our efforts went in vain, so we gave up and started fishing the old Kuwaiti profession before oil. Life was slow and we were depending on New Zealanders since our money was not worth anything. Soon electricity was gone since the diesel inventories finished, and life became similar to the 1940's all quiet at 7 in the night and wake up early to go fishing or to the market, now of course a growing number of people resented this way of life and wanted to go back but knew it is impossible you just cannot go back and paste it.
I found a good job of making desert camps for the New Zealanders with camel and horse rides, I made enough money for my daily bread, in fact they loved it and more of them adventurers were coming and having fun in the desert. I loved this way of life with no phones or internet; especially the kids were daily going to the beach or helping me with the camel rides, and in the weekend we would take the ferry to New Zealand to buy vegetables and spend the day in their gorgeous country. But as we say in Arabic the beautiful is never complete and perfect, the Australians whom lost a lot from tourism came to us with an offer we could not refuse, the western desert for electricity we of course accepted, and my job vanished in process. The Australians did not waste any time and started building roads, hotels and resorts in our desert, to the point that we thought that is nice let us bring those tugs again and move the country to Hawaii, that how cheap we started to get in our thinking. Few days later the Australians approached me saying how about you get your job back, that camel of yours cannot be controlled, of course I said thanks to my camel Itrees whom I hated so much but I was making a living with him, in fact I was getting rich so I got Itrees a wife and was on my way to establish a micro economy, with staff and office. 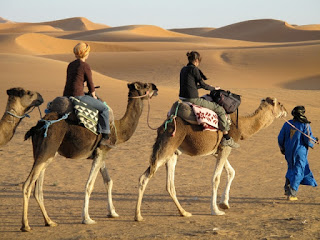 I woke up almost standing up from this dream, thinking thank GOD I do not have to feed that smelly camel or walk 2 kilometers to reach that camp, but after a cup of coffee and watching the news ,,that dream did not seem to be that bad and I dare anybody to explain it!!!!
Posted by nael noaman at 9:42 AM