Hair, long beautiful hair, hanging down to there. 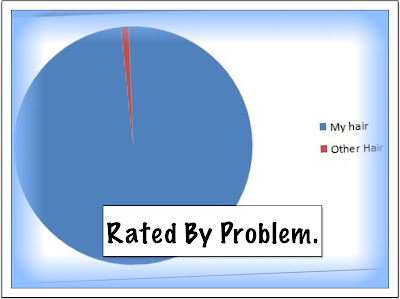 My hair is the worst hair in the world. As evidenced by the pie chart to the right. This was a formal survey performed by the United Nations toward the end of the cold war. It was a misguided effort to calm the nerves of nations whose past 40 years had been locked in a tenuous state of peaceful belligerence, kind of like my marriage. (Just kidding, my wife is wonderful)

When I was young all of the really cool people had long, wonderful hair. Jim Morrison, John Fogerty, the Beatles, Clapton, Burdon, the entire cast of Jesus Christ Superstar. But, my hair was like a brillo pad, with ADD. Like Medusa's it had a life of its own. And I had to wear a pony tail, which looked like I was carrying a rodent on a my collar.

Then, when I was in my early twenties it started turning gray. Salt and pepper hair may look distinguished on an aging politician, or actor, but on a twenty five year old with a wild mop of uncontrolled curls sticking up all over the place it was decidedly uncool.

So, at thirty, I decided to get my haircut short, and have never looked back. Occasionally, after a few glasses of wine, and some Grateful Dead, or Hot Tuna I will say to my wife, "You know, I am going to grow a pony tail."

She will sigh, and say, "Whatever you want." And then I will drift off to a world in which my hair is fantastic, like Jeff Bridges' hair in "The Big Lebowski," Man, did it look good.