Mondays were always the worst. That Monday was even worse, and it went downhill on Tuesday. Tuesdays are always the worst, and this Tuesday was the worst of all. It started with rain. Not real rain, just drizzle. Spit from the heavens. And it was gray, not drab gray, dead gray. Everything looked dead, and gray.

Zach was sick of the day. He was sick of his job. Working as a customer service associate in a huge company kept him nameless, faceless, anonymous. He had no control, no authority, and nobody valued his opinion, even a little. The only people who even talked to him were his co-workers, who hated him, and each other, and their jobs. 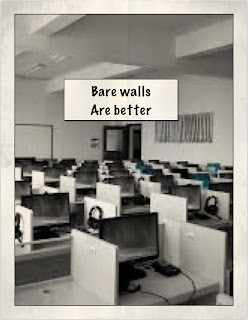 Their jobs were easy to hate, too. People would make a mistake, in a process that was almost fool proof, then call in and complain. Complain to people working in tiny, bland cubicles, cubicles where even the smallest reminder of a world away from the constant, endless whiny sound from the telephone was prohibited.

Zach went to get a cup of coffee. Brian and Bill were standing, just almost in the way of the coffee maker, so close that you could squeeze past and grab the pot, but it was difficult, and they were talking about sports. And they were talking in a manner that made them sound as though they were experts.

"They need to run the ball more effectively on first down. Then the pass game will be more effective. The way it is now, they set themselves up for failure. Everybody knows what they are going to do. The defense can just pin their ears back and come at Jeffson with abandon."  Brian said, sagely.

"Yes, and they need to spread the field, and make them cover them in space." Bill said, wisely.

"You know what, why don't you guys shut the hell up, and get out from in front of the coffee maker." Zach said, with anger.

"Not a Fillmore fan?" They both asked, incredulous.

Wanda, from accounting, walked past and bumped Bill from behind. He stumbled into Zach, spilling his coffee down the front of Zach's shirt. "Oof," Bill said, in a way that showed he was not guilty, and did not have to apologize.

He pushed Bill down, and reached for his gun.

Brian and Bill saw him pulling out his weapon and dove behind Wanda. Zach fired wildly, missing everything except for the vending machine.

Ted heard the gunfire and pulled his piece. He jumped out from his cubicle and squeezed off a few rounds before a can of Fizzy cola in the vending machine behind him burst, spraying him with sticky, sugary liquid and scraps of a candy bar that was in the slot beneath the cola.

“I’m hit,” Ted croaked, weekly, falling on his back and reaching slowly toward Heaven.

Wanda pulled a pistol from her ankle holster and sprayed the area with bullets before jumping behind the mail cart.

Soon, the entire 4th floor was filled with the sound of gunfire, the smell of gunpowder, the floor was covered in little, empty brass cartridges.

Down on the street, Big Jim from Jim's Big Sandwiches, a cart in front of the building heard the gunfire. He dropped to the sidewalk, rolled under his cart, and pulled a light antitank weapon from a concealed compartment.

To be continued.
Posted by Tim Clark at 2:52 PM