Don't Be An Online Bitch 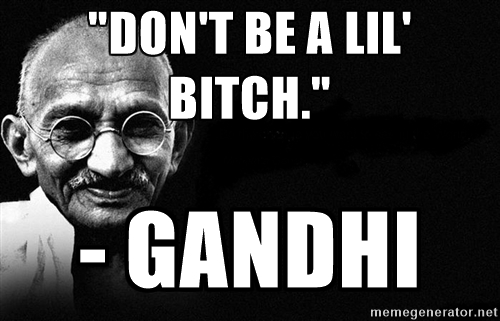 Many years backs, there was a fad of using certain browsers, or ad bars in the hopes of getting paid to be online. You would get a certain percentage of every referral's browsing money too. It was a wonderful system where you could simply install the browser, nag all your friend to install it too, and just watch all the money roll in every month. Almost everyone online in the 90s fell for this one (myself included) and in the end, nobody actually made anything. The scam continued for a while until the Bill Clinton "Pets.Com" bullshit economy finally went belly up (for those of you who think you pay attention this was before Bush became president) and all of the online browsing pyramid schemes were able to just disappear, while people were concentrating on all the TYCO, ENRON collapses going on.

Now having lived through all that, I happen to be a bit jaded when it comes to online schemes. My friends at Google Adsense, manage to give me a hundred bucks or so a month for website and blog advertising, and it is stable, steady and most of all completely real. That doesn't stop everyone from trying to get those ad spaces with tales of grandeur and preposterous prosperity from coming along every now and then. The moment I take one of them seriously, I go from a "hobby" to a "job" and worse than just a "job" but a "job" that takes up a lot more time, for a lot less money than a lucrative career at Dunkin Donuts. The trick is to know what you do, and what your visitors are there for. I assure you, they aren't there to be sold anything, or given a dream of striking it rich. This is why I don't do anything on commission, or revenue sharing. Used car salesmen do that.

Now don't get fooled by the names attached to something either. Just because Google or Microsoft have placed their names on something doesn't mean that it is completely up and up either. Google has a rewards program I tried once, where you take surveys for Google Play credit. Sounds easy enough right? Yeah, they send you surveys that don't give you credit in hopes that you "might" get surveys for credit afterwards. After a few of these you "definitely might" get some that give you credit, and after a few of those you get ones that "most certainly might" give you credit. In other words you are being Google's bitch for a unicorn and a basket full of rainbows. You might as well register Democrat, for all the same benefits. Microsoft has a rewards program too which at least gives you a 5$ Dunkin Donuts gift card every 3 or 4 months for using their browser.

Do what you like, try what you want, but always ask yourself before it gets out of hand, "Am I being an online bitch?" The term is blunt and offensive, but it will hit you a lot harder than, "I wonder if I am being taken advantage of?" The answer to the latter is "Well of course not, I am not spending money!" (for the love of God don't spend any money btw) when the answer to the first one is "Damn, I am wasting time for a fantasy, and that makes me look like ... oh damn ...." If you are sitting in front of a computer convinced that you have nothing better to do remember something I learned years ago, someone does pay me for my time. My place of employment pays me a certain dollar value for every hour I am in there. If I am not doing something I enjoy and it doesn't give me some sort of benefit, then I should be at work, and getting paid. That is the value of my time, and I an't nobody's bitch.
Posted by Jeremy Crow at 7:15 AM