So, it is with some remorse, some painful self loathing I have to admit when there is an accident on the freeway on my way to or from work my first thought is "I hope it doesn't bog down my drive." I always have a pang of guilt because at the very least somebody is going to be inconvenienced while their car is being repaired.

And I never root for accidents. For one thing it really fouls up my drive. But, if an accident happens anyway, this morning for example, sometimes I hope it involves someone whose driving has impressed me as being exceedingly risky. 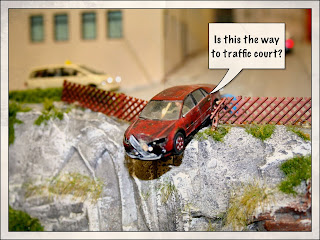 I never want them to get hurt, and I don't really want anybody to have an accident, but if there is going to be one anyway it might as well have that insane person in the Chevy Equinox who weaved in and out of traffic, despite the treacherous conditions. If somebody is going to be involved in a collision it might as well be a person who is driving recklessly. Somebody who saw the person only fifty yards in front of us slide almost out of control on the overpass. Someone who had just been offered such startling proof  the conditions were less than ideal.

If somebody is going to have to pay a higher premium, and answer a lot of questions from a surly, freezing police officer it might as well be a person who disregards countless visual warnings. It just makes sense. Most of us just find a place in line and make time the best we can.

I have to admit, though, I am always grateful when I get to the accident and it is not the person I wanted to have the accident. This morning the first accident was a Kia Sedona and a Dodge Ram on the overpass leading to the airport. The pickup truck had hit a patch of ice and spun completely around and the Kia was in the wrong place at the wrong time. It happened with enough force to push both cars into the barrier designed to keep cars from driving off the overpass, which worked perfectly by the way.

It looked as if everybody was walking, and nobody was hurt too badly. I felt bad for them, and couldn't even really be too angry about the delay, since there were three more accidents, all on or just after a bridge or overpass. Me and my trusty steed strolled into work, late but without a scratch. And to my relief none of them seemed to involve serious injury or the Equinox. I can't live with that kind of guilt.  I guess I should be more careful what I ask for.